A Local Artist and A Favourite Place.

In 2020, despite restrictions, I had the pleasure of attending a workshop with Parisian street artist CaroleB at the Atelier Piece Unique, near my home in the outskirts of Paris. The Atelier is the brainwave of Cécile Coutant, who has created a great venue which runs art lessons and workshops, sells art materials and has an Italian café restaurant, run by the inimitable Lucia.

The afternoon workshop resulted in my making this print using Carole’s stencils ….. I have been following Carole’s career ever since and I recently went to Paris to photograph a wall that she worked on, for a live painting event, with other women street artists in celebration of IWD.

Street art in Paris has had a renaissance in recent years, evolving from an illegal night time activity to exclusive live painting events. There are at least six neighbourhoods where you can see street art in Paris.

From the Bassin de la Villette to the festive district of Oberkampf via the 13th arrondissement or the inner suburbs, there are now many places in Paris where street art has its place. You often need to look up to discover graffiti emblems of hip-hop culture, mischievous stencils, poetic collages and sometimes monumental murals. The work that I wanted to see on this occasion is in the Buttes Aux Cailles neighbourhood, in the 13th arrondissement in the southern part of the city. Far off the beaten tourist track, this Parisian quartier is worth the detour. For example Avenue d’Ivry, is home to the largest Chinatown in Europe, which brings together supermarkets and Asian shops that come alive for the Chinese New Year. Around the Butte-aux-Cailles, the streets suddenly take on a provincial flavour and this area has become well known for its street art.

The Butte aux Cailles was named in honour of the Cailles family, who once operated a farm on the hillside. Until the 19th century, two hundred watermills turned on the Bièvre, a river that flowed through the area and which is now covered over. The place retains its charm, because the Butte remained a working-class village until its incorporation into the city of Paris at the end of the 1880s.

The first street art that I saw was a mix of styles, some of it rather ugly, as you can see here ….. What I was looking for was the Colors wall in rue Alphand, where the work of eleven women street artists has been on display since the weekend of International Women’s Rights Day, March 8th.

From the festival web site:

Imagined by the artist Combo, the Colors Festival* has returned to Paris for a second edition, from 2 April – 8 May.

More than 65 artists, French and international, will be show cased.

This latest edition gives pride of place to colour with monumental installations imagined by the artists, in playful and immersive spaces…

Live paintings on weekends and late sessions on Thursday evenings.

The eleven women street artists created their work during a weekend of live painting. 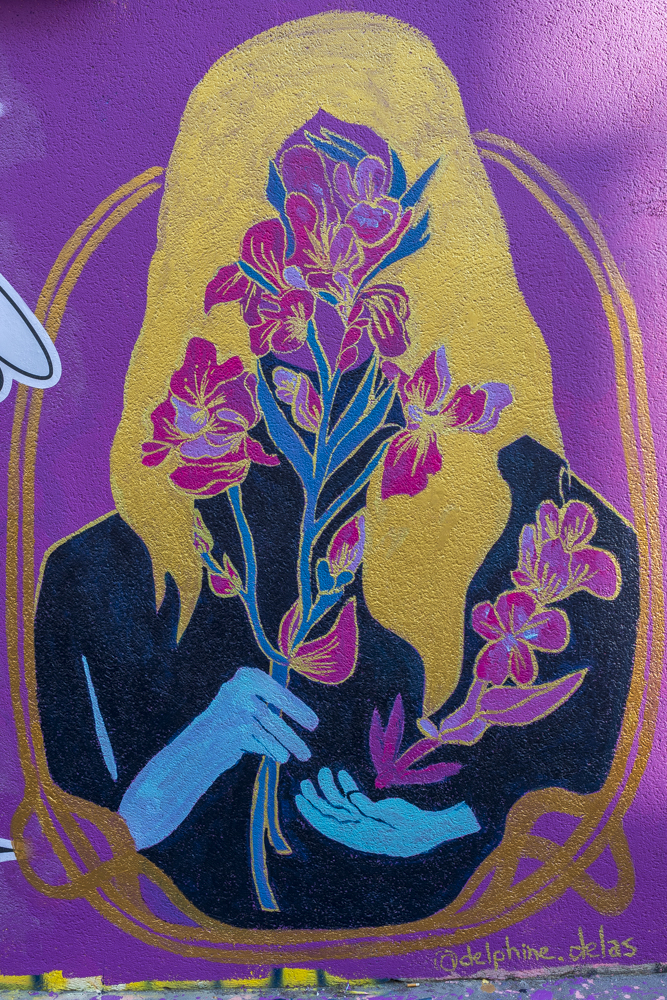 The 2022 campaign theme is #Break The Bias, seeking to promote gender equality.

A world free of bias, stereotypes, and discrimination.

A world that is diverse, equitable, and inclusive.

A world where difference is valued and celebrated.

Together we can forge women’s equality.

Collectively we can all #BreakTheBias.

Not all of the art works on the wall feature a slogan. Those that do promote: @carolebcollage –  Liberté. Egalité. Solidarité. (Freedom, Equality, Solidarity); @tbeardraws – Libération pour tou.te.s. Egalité. Sororité. (Freedom for all. Equality. Sisterhood); @rblbird – My Body, My Choice and the unequivocal @missmeart – Stop blaming women for the misbehaviour of men.

Whatever your taste in art, I thoroughly recommend visiting the streets of the more working class quartiers to hunt out the wide variety of street art on display. You will find that a quick search on the internet will deliver all the information you need, as well as various possibilities for street art walking tours with a guide.

I have not unfortunately been able to ascertain whether these works of street art will be on display permanently or temporarily. They may well be replaced with a new campaign in the future, as impermanence is one of the defining factors of street art. I will be following these talented young women through their social media to see what they will create next.

*Tickets for the Colors Festival Paris can be reserved on the site here.